The Clean Air Act that we know today was passed in 1970 during the Nixon administration. Since that time, the EPA has been hard at work passing regulations aimed at cleaning the nation’s air. Its efforts have been extremely successful. I recall living in the D.C. area in the early 1970s before most of those regulations really took effect and the air was so polluted that on some days you could see the smog just looking across the street. I can’t describe what it was like as a kid in a car while going through Newark in the 60s on the elevated turnpike and going straight through huge clouds of sulfur dioxide and other hazardous air pollutants being belched by smokestacks next to the turnpike.  I doubt that kids growing up today have any understanding how clean the air is now.

One problem, however, is that the Clean Air Act really does not have any brakes. The EPA continues to look for any potential effect on human health and passes regulations requiring that the emissions be eliminated, in some cases, even though the cost far outweighs the benefits. Today the United States Supreme Court dealt a rather stunning blow to the EPA’s rulemaking authority in its June 29, 2014 decision in Michigan v. EPA. At issue was whether the EPA had to consider the economic impact of its hazardous air pollutants (“HAP”) emission standard for mercury emitted by electric power plants. The EPA regulates HAPs for stationary sources. A source that emits more than 10 tons of a single HAP or 25 tons of HAPs in combination is a major source. Power plants are also required to meet additional requirements. One of those requirements directed the EPA to perform a study of the hazards to the public health reasonably anticipated to occur as a result of power plant emissions of HAPs. The rule at 42 USC § 7412(n)(1)(A) also provides that if the EPA finds that regulation is “appropriate and necessary” after considering the results of the study then it shall regulate the power plants.

Justice Scalia focused on the “appropriate and necessary” language and held that this means that the EPA must consider the economic impact before imposing certain new emission standards on power plants.  The EPA’s own regulatory impact analysis estimated that the cost of the new standard would be about $9.6 billion per year. I know that this is a laughably ridiculous underestimation of the actual economic costs. Even so, the benefit was estimated by the EPA to be no more than $6 million per year. Again, this is probably a gross overestimate by the EPA. Justice Scalia noted that using these figures the costs exceeded the benefits by at least 1,600 times.

A majority of the court agreed with Justice Scalia’s conclusion that the EPA is directed to engage in some sort of economic analysis before imposing the new standard on power plants.

What is the importance of the case? First, it may have application to other areas of air pollution regulation outside of HAPs for power plants. The majority opinion’s broad conclusion that the “appropriate and necessary” language sends a clear signal that attorneys should consider the fact that the Supreme Court is willing to read into the Clean Air Act requirements that the EPA act reasonably.  Second, the decision was reached after the EPA published the rule in 2012 after notice and comment. Challenging an EPA rule is a complicated process that actually starts at the Circuit Court level. It can be difficult to raise a challenge after the appeal period has expired.  In other words, this law may have more prospective effect on the EPA than retroactive effect. Third, it may be too late. Utilities have already shuttered plants based, in part, on the difficulty in retrofitting those plants with the necessary emission controls for mercury. 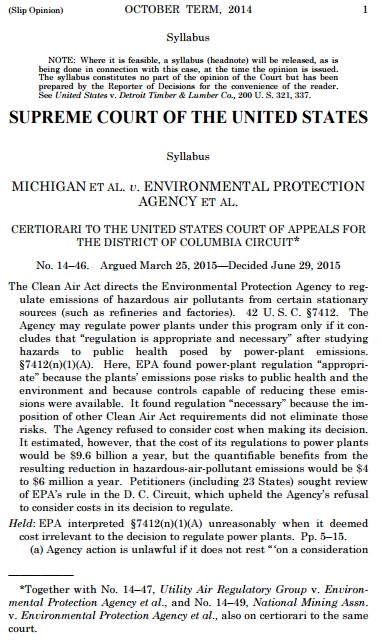