Shipping chemical samples or small quantities? OSHA has a special plan for you.

Here is a really dumb rule. OSHA has a rule at 29 CFR § 1910.1200 that requires that all containers of hazardous chemicals comply with the “United Nations Globally Harmonized System of Classification and Labeling of Chemicals, Revision 3”, if that container will be in a workplace.  This OSHA rule is still being rolled out, but as of June 1, 2015 all chemical manufacturers, importers, distributors are subject to the rule except that distributors may follow the previous system until December of 2015. After June 1, 2016 all employers will be subject to all aspects of the rule. Training was supposed to be undertaken by December 1, 2013. If the MSDS sheets need to be included, the new labels can run many, many pages of fine print. The new rule is estimated by OSHA to cost $201 million every year. That means that after ten years industry, will pour 2 billion dollars into affixing gigantic labels on bottles and containers.  OSHA claims that 40 plus lives will be saved per year because we all know that booklets written in 8 point type are compelling reading by workers and they will actually read and understand warnings such as:

It is also interesting that the warning level system has been reversed. So a 1 is now bad where as before it was good. Silly me for thinking that this single change will probably kill more workers than the rule is designed to save. And why do that? Because that is how they do it in Italy and Slovenia. This reminds me of a client of mine that was bought be a Japanese conglomerate. One of the first things that they wanted the plant to do was to change all of the red warning buttons to green. All because that is how they do it in Japan. Sure, reverse a lifetime of warning labels so that it we match the United Nations standard — because we send our workers to work all over the world. 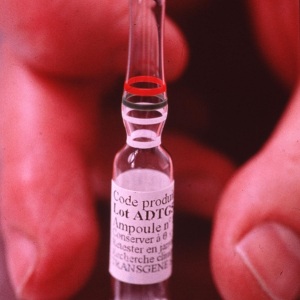 But the most perplexing aspect of this new regulation is the inflexibility of OSHA when asked if it is really necessary to attach giant labels to chemical ampules the size of a thimble. In a letter dated June 4, 2013, OSHA responded to a letter from the National Institute of Standards and Technology that had asked if an exception could be made for the labeling requirements for the tiny vials or ampoules that the Institute sends to labs as standard reference materials. OSHA responded by stating that: “Ampoules/bottles of the hazardous chemical must be labeled with the hazard information required by HCS 2012.” As a “practical accommodation,” OSHA offered to allow a smaller label with only five sets of statements and pictograms, as long as the ampoules were placed into a larger container that contained the entire warning, including a warning that the “small container must be stored in the outer container bearing the complete label.” Practically, this means that a tiny ampoule holding not much more liquid than the tears running from a crying politician’s cheek must be placed into yet another container with strict instructions that the small container never be removed from the larger container.

Here is the link to the crazy

This is absolutely insane. And this was one federal government agency providing direction to another federal agency.

1 Response to Shipping chemical samples or small quantities? OSHA has a special plan for you.