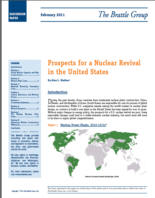 I have paged through the Brattle Group publication “Prospects for a Nuclear Revival in the United States.” The author is Alan Madian. This document has a published date of February 2011. Since this report was published right before the March 11th Fukushima nuclear plant failure, I was curious if the report discusses any of the unique environmental and safety risks of nuclear power. Well, it does not. Not a word.

I should add that the report is nonetheless an interesting source of information regarding the economics of nuclear power plant construction in the United States. As the article points out, it is difficult to justify nuclear plants based on a comparison of coal and natural gas-fired plants. There is not only a large number of regulatory hurdles that must be met, but the labor and technology costs are extremely high in the United States; double that of many other nations. Also, the large number of abandoned nuclear plant projects means that it is difficult to obtain financing for nuclear plant projects. The author concludes that even if eight new plants were built, this would not revive the U.S. based nuclear suppliers and related construction industry. He also states: “With current policies, new U.S. nuclear power plant construction may not commence at all, and if commenced is unlikely to outlast the availability of financial guarantees, subsidies, and related tax benefits.” The author repeatedly makes the point that U.S. construction costs are artificially high. Although he did not say this in so many words, I get the impression that the nuclear industry in the United States is suffering from a feedback loop where regulations reduced the number of plants being finished, which in turn reduced the skilled labor pool needed to build more in the future, which increased costs, and which in turn made nuclear power a less than desirable alternative.

Although ignored by the author, the genesis of this nuclear power death spiral is the fact that regulators are rightfully concerned about the risks posed by nuclear power plants. That concern is what drives up the compliance costs. And, as Fukushima proves, regulatory oversight is needed in order to prevent more accidents.

The effort by MidAmerican Energy here in Iowa to use legislation to shift the high construction cost risk, financial risk, and stranded cost risk to the Iowa taxpayers and ratepayers is an interesting means of getting around the cost issue. “Just make the public pay for it” seems to be the governing principle. Even ignoring the safety issues, it seems that the nuclear power industry in the United States is suffering from systemic problems that will not be solved by building a few more plants. High costs are here to stay and given recent events, will increase as regulatory oversight is increased.

Attorney with BrownWinick Law Firm in Des Moines, Iowa.
View all posts by James Pray →
This entry was posted in Articles, Energy. Bookmark the permalink.
%d bloggers like this: